If you’re not familiar with the Lego slang, here is a quick recap for you!

Dark ages
The period of time between the moment when you stopped building Lego as a child and when you started building as an adult.

Minifig-scale
This has been a debate for decades now ! Some people say that Minifig scale is just a simple math operation based on the average size of a human and the average size of a minifig. So roughly 1:40.
But oversimplification is rarely a good thing.
In fact, the proportions of a minifig are very different from most living people, they are larger and their head accounts for 25% of their height ! 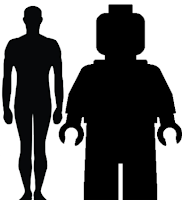 Also, building at minifigscale needs to make sense with the legions of existing Lego elements.
A simple seat is generally 2 stud wide.
A simple door, 4 stud wide to fit a minifigure through it.
But a coin is 1 stud wide !
And so on…

Minifigscale is more a state of mind than a precise scale. And if you really want to quantify it, it would be a range of scale… As large as between 1:30 and 1:60.
Designing Lego Models is not the same as designing Models.


MoC
Stands for My own Creation, as opposed to “official Lego set” However, this term can become confusing when people (like me :p) start to provide the instructions to their MoCs.
Because when someone builds a "MoC" designed by someone else, it should not be called a MoC anymore !
So I would love these to be called a SeC (Someone else's creation) ! If we all start using it, it may become a thing !

SeC
See my definition for MoC above !

UCS - Ultimate Collector's Series
Originally, it was a label Lego gave to its official product that were bigger, more detailed, more complicated and aimed at an older audience.
Some people may think that UCS is a scale, but it is not !
Some sets are minifig scale without being UCS.
Some set are UCS and far from being minifigscale (from one extreme : Snowspeeder to the other : SSD)
There are only few sets that are both UCS and Minifig-scale.
For MoCs, the term is also used to describe larger, more detailed, more complex builds with usually less visible studs.


Bricklink
Bricklink is one of the main shopping platforms for Lego bricks. At Bricklink, you can buy sets/minifig/parts/instructions and even empty boxes from over 10,000 shops scattered all over the world. I have been using it for years with minimal problems.
The Lego Group just bought this site recently, we'll see if it changes things. I listed some tips for you here !

SNOT (Studs Not On Top)
A building technique where the studs are in another direction than up. In order to utilize LEGO to its full advantage, one must learn to change stud direction to create shapes that are a less LEGO-like.

Studless
A studless build is one where the designer tries to hide all the studs to give a more realistic appearance to the build. (Using tiles, slopes ans SNOT technique)